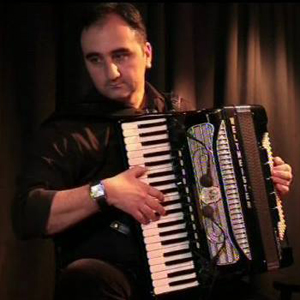 Spyros Melissanidis was born in 1972 in Dachau, Germany. He started, at the age of 10, accordion lessons with professor Nikos Hatziioannou, with whom he completed his studies in the instrument and in advanced music theory at the Conservatory of Thessaloniki, from where he graduated with honors obtaining Accordion degrees, Harmony, Counterpoint, Fugue and Accordion diploma. He is a graduate of the Physics Department of the School of Sciences of the Aristotle University of Thessaloniki (AUTH) while at the same time he has obtained a certificate of computer studies with the right to teach in the public and private sector (under the
auspices of the Union of Greek Physicists and the General Department Of Physics, Chemistry and Technical Materials, TEI of Piraeus). He has full-filled the 2nd year of the Composition department of the Conservatory “Symfonia” of Thessaloniki (class of E. Katelis).

He is in charge of the study program in accordion at music institutions of Thessaloniki.

During his military service he was a musician-orchestrator of the military band and the orchestra of traditional and folk music of the SSM / XVI M / K MP of Didymoteicho and a member of the IT Group of 162 A / K MBP and 163 A / K MBP-PEP with the possibility of management of classified documents.

As an accordionist he collaborated, as a soloist with the Symphonic Orchestra “Spyros Samaras” of the Conservatories “Astrinideiou” & E. Samara ”Thessaloniki under the direction of Mr. Kampanis Samaras (Thessaloniki Concert Hall, French Institute of Thessaloniki, Vafopouleio Cultural Center), as well as with orchestras of Greek traditional and folk music, foreign music (new musette, tango nuevo, latin, jazz) and with traditional dance groups with appearances on music stages and in concert venues in Greece and abroad (New York, Amman, München, Wien, Stuttgart, etc.).

He is a member of the jury of the Panhellenic Accordion Competition.

His students have won prizes in domestic and international Accordion competitions.

He has been the correspondent in Greece of the largest online database for the Accordion (www.accordions.com) for two consecutive years.

He has composed and adapted works for Accordion, for small and large organic ensembles.

He has recorded for radio and television channels in Greece and abroad, while his personal discography includes the digital album “Ten Years Ago” with his personal compositions.

He has experimented with MIDI music applications and the digital Accordion.

He deals with improvisation (free contemporary ) by participating in the live music investment of poetry events, while the relationship between music and the Accordion with the other arts (theater, dance, painting) is the focus of his activities.

His diploma thesis at the Department of Physics of AUTh: “The Acoustics of the Accordion” as well as a series of books he has written and translated on topics related to the Accordion, are unique in Greek literature. His articles have been published in local newspapers on topics such as rebetiko, music education and the accordion.

He has the largest collection of records (Cd’s) with accordion in Greece and one of the largest in scores and books.

He participated in the International Marathon (Walk-a-thon) of the Ronald McDonald House in New York for children suffering from cancer, representing Greece.

He has been the advisor of the gold medalist of rhythmic gymnastics I. Melissanidis.

His hobbies are reading (with emphasis on science books of everyday life, cosmology and astronomy), gymnastics, dance, collecting cassettes, vinyl records with music mainly from the field of jazz, classical and traditional music and learning of instruments (clarinet, tambourine).