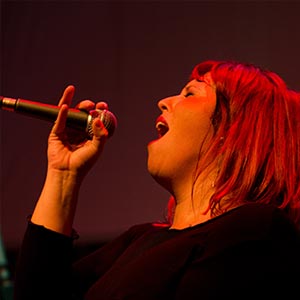 Fiona is of Greek-German origin, born in Greece. Graduated dramatic soprano – with extensive teaching and solo experience as a performer of classical repertoire, but also as a performer of blues-pop-rock music.

She is also a composer of pop-rock-blues songs and is professionally involved in the production of personal music projects and also teaching.

Among with her artistic course, since 2004 she has been teaching singing

and vocal seminars in Conservatories, Music Schools and Theatrical Workshops

in all of Greece. In 2018 she founded FindMyVoiceWorkshop in Thessaloniki, a vocal / singing workshop for everyone. An alternative group lesson project, aimed at training, relaxation and healing through the art of singing.

In the summer of 2020 she completed and published her first book on the two-way relationship between Voice Art and Psychotherapy, entitled «FINDMYVOICE – A Holistic Method of Voice / I Heal myself and Heal with My Voice”»

She was a member of the jury of the Artistic Student Games of the Aegean Region.

She collaborated and sang with the German soprano Cristiana Jordan at the German School of Athens, in the play “Two Women, Two Europeans, One Voice”.

He dedicatedly served the lyric song for several years, giving solo recitals throughout Greece and abroad. Her opera repertoire included roles such as:

Classical education did not stop her from pursuing her love for other types of music such as blues, rock and soul. She started collaborating with bluesrock bands as a lead singer with appearances in clubs in Athens, the region and abroad.

She was a lead singer in the Bluesband “TubeaBassa” where for four years they gave concerts and participated in festivals all over Greece.

She participated in two world-fusion records, doing the vocals. In 2002 – “VisionaryWorld” and in 2004 “Hyperfly” by Albert Panagiotopoulos and since 2010 she was a founding member of ALTRIBE as a lead singer and songwriter of the band. With ALTRIBE she has released a total of four complete albums and two singles.

2012 single “I’m getting further and further away” Warner Music

In May 2018 she released her first complete solo album “You heal my heart” with songs she has composed, but also in collaboration with Albert Panagiotopoulos, in production and orchestration of the famous drummer / composer / producer Nikos Antipas known by Socrates and his collaborations with Haris Alexiou, Alkisti Protopsalti, Sting etc.