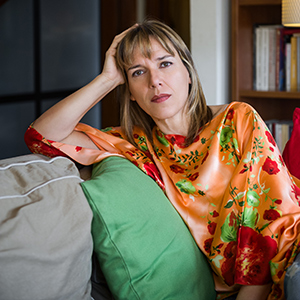 She was born in Volos. She studied lyric singing (diploma in monody with honors) in Athens, music pedagogy and jazz improvisation in Paris (Ecole d’art Martenot, IACP), where she worked in public elementary schools and participated in jazz concerts. In Greece she collaborates with conservatories of Thessaloniki and Athens as a music teacher and teacher of monody and contemporary singing.

She has participated in productions of the Athens Concert Hall (“A history of jazz”, “Pyladis”) and has collaborated with the Amphitheater of Sp. Evangelatos in Epidaurus in music teaching.

She sang with the Quintet Mib (tango) of the Ionian University, the Novitango, the Jazz Upstairs Band, the Jazzin ‘, the Jazz Orchestra of the Municipality of Athens under the direction of Th. Zervas and G. Terezakis but also with well-known Greek jazz musicians in stage concerts in Athens, Thessaloniki and other cities in Greece.

She has collaborated with composers such as M. Lapidakis, G. Kouroupos, N. Kypourgos, D. Papageorgiou, S. Adam, and has participated in various festivals. In collaboration with Ioanna Polyzoidou has presented Lieder by G. Malher, Cl. Debussy, Ch. Ives, J. Brahms, De Falla, et al. She has also collaborated with the Laboratory of Contemporary Music of AUTh on the Sequenzas of L.Berio
http://www.youtube.com/watch?v=XgcHm9Owmt4 “Farewell to the Land” Charles Ives
http://www.youtube.com/watch?v=szLzZwTzJZ0&feature=related “Sequenza III” Luciano Beriο

She has repeatedly sung film music in her concerts. She collaborated with the Orchestra of Colors in the music-cinema circle and with the Plaza ensemble in a tribute to European cinema.
http://www.youtube.com/watch?v=haCfKqevaOE&feature=youtu.be “Phaedra” Theodorakis

She participated in the CD “Works of Greek Composers” by the “Night Orchestra of the Municipality of Patras”.

Video from her collaboration with the French composer / trumpeter Serge Adam appears on his site http://www.youtube.com/profile?user=whatisupdoc

In December 2008 the cd synomilia was released for voice, trumpet and electronics with Serge Adam from the company defkaz – http://www.myspace.com/synomilia

She has written the music-educational book “Pinakoti – pinakoti and in games music” (Spudi Publications) as well as the collection of children’s songs “Afou afou fu” and the musical fairy tale “Mr. Petran the long walk of the moles” which were published on CD / book from the Municipality of St. Petersburg.

The musical tales “Mr. Petran’s long walk” and “Tiribibim the knight of colors” are published by Diaplasi.
In November 2013 she participated in the show “Kantan” by A4M productions at the Avlaia Theater.

Her books “Voice games, from speech to song” and “Tiribibim in the world of percussion” are being published by Diaplasi.