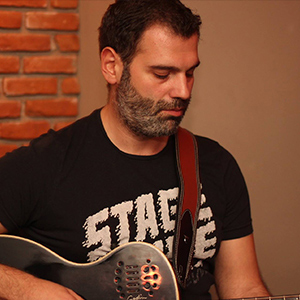 Christos Larisis was born in 1982. He started his studies in music at the age of 7.

He has worked in almost all the music stages of Thessaloniki and in several of Athens.
He has been teaching acoustic and electric guitar since 1999.
He has collaborated with many well-known artists such as: Melina Kana, Eleni Peta, Michalis Emirlis, Zoi Papadopoulou, Eleftheria Patsi, Kostas Makedonas, Giannis Spanos, Mimis Plessas, etc.

Participation in the new album of Kostas Makedonas.