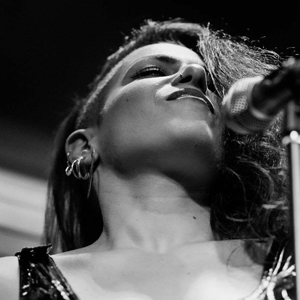 Areti Valavanopoulou was born in Kavala in 1988. At the age of 8 she enrolled in the DOK, where she attended classes in classical guitar, theory, solfege, harmony and music history. She participated for years in the children’s and later in the teenage choir of the Conservatory. Since 2006 she has been living permanently in Thessaloniki, where for 2 years she studied classical singing with Sofia Kakoulidou and 4 years contemporary song with Evi Siamanta. She has passed the Grades of LCM (University of West London) with excellent results and is advancing for the diploma Teaching and Performance of Popular Music Vocals. She has collaborated with Dimitris Starovas, Alkiviadis Konstantopoulos and with many remarkable musicians and bands of the city (Nemesis, End of Innocence, Guilty, Mind Vibes, Funk ’em Up). She is the lead singer of the project band “Freerock Saints’ ‘ with whom they have released two L.P (Blue Pearl Union 2016, Electric Passion 2017) from the American company Grooveyard Records N.Y. She has attended acting classes at the adult laboratory of the Andreas Voutsinas Drama School, as well as a complete series of physical theater seminars at the A4M Center for the Performing Arts with Athena Dragou. Since 2012 she has been actively involved in rock opera and musicals.

-I Have a Dream jukebox musical by Anta Tsesmeli-Edwards (2015 Vergina Theater-Regency Casino).