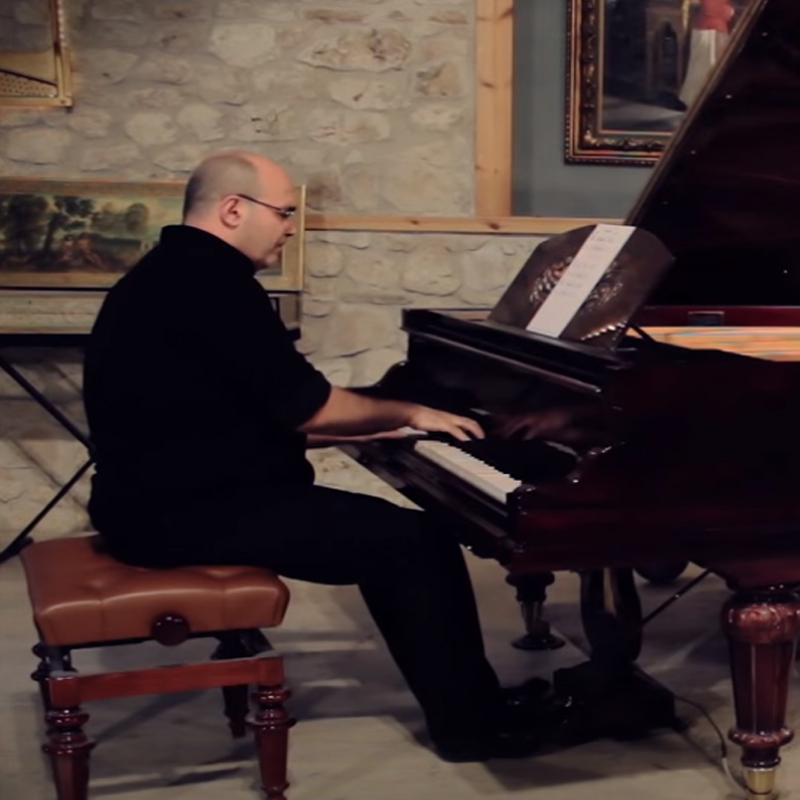 He studied piano with Professor Panagiotis Mitsopoulos.
In 1991 he received a Diploma from the “Royal Academy of Music” in London with corresponding examinations held in Thessaloniki, scoring the highest score in the Mediterranean (170 out of 200)
In 1995 he received a Piano Diploma with the grade “Excellent” from the Conservatory of Northern Greece, with professor Simona Michai.
In 1995, after a 5-day seminar in Athens, he received from Berkley College of Music the only scholarship awarded that year to a pianist in Greece.
In 2013 he received the “Fellowship Diploma of the London College of Music (FLCM)” in Jazz Piano Performance, from the University of West London, after examinations held in Thessaloniki.

He has attended seminars with Giannis Jonker, Giorgos Chatzinikos, Christine Fressinier, Ray Santisi, Ganev duo, Jon Hendricks, Milcho Leviev, C.Bucke, Larry Monroe, Marc Halbheer and others.
In the summer of 2005 he took part in the “Jazz clinics” of the Umbria Jazz Festival in Perugia, Italy with professors from the Berkley College of Music.
In the summer of 2009 and 2014 he taught jazz seminars at New Bulgarian University in Sofia, Bulgaria.

In 1998 he participated in the international jazz piano competition “Martial Solal” in Paris.
In 2003 he played at the 1st international jazz festival in Bankya, Bulgaria with Vicky Almazidou and Lydian Riff.
In 2004 he took part in the closing concert of Dimitria that was organized at the Thessaloniki Concert Hall, with the orchestra of Akis Gounaris and soloist Manolis Mitsias.
In 2005 he took part in the charity concert for the victims of Sri Lanka that took place at the Thessaloniki Concert Hall, with the Thessaloniki Municipal Orchestra and soloist Dimitris Bassis, in the work of Mikis Theodorakis “Axion Esti”.
In 2012 he played with Milcho Leviev and the Symphony Orchestra of the Municipality of Thessaloniki in the concert “Milcho Leviev and friends” which took place at the Thessaloniki Concert Hall as part of “Dimitria”.
He has performed at the Tellogleio Foundation Center of Thessaloniki with the Orchestra of the Department of Music Studies of Thessaloniki, at the University of Macedonia with the Big Band of SOTH and SOTH. Quartet, at the Vafopouleio Cultural Center, at the Polichni Cultural Center, at the Goethe Institute and at the AUTh ceremony hall, playing works of jazz, classical music, Kurt Well, Astor Piazzola etc.
He has collaborated with renowned musicians such as: Milcho Leviev, Chico Freeman, Craig Baley, Marc Halbeer.
He has played and collaborated with many famous musicians and bands in Athens, Thessaloniki and other cities such as: Vavel (Metal), Aroma Caribe (latin) Humpty Dumpty (Funk), Jazzoo, Nariz, Costas Magginas Quartet, Julie Massino etc. )
Since 1989 he has collaborated with well-known Greek musicians such as: G. Spanos, E. Tsaligopoulou, M. Rasoulis, L. Kalimeri, N. Papazoglou, M. Mitsias, M. Kana, D. Bassis, E. Paspala, N. Ziogalas, E. Siamanta, D. Galani, K. Kouka, Z. Papadopoulou, J. Massino, M. Frangoulis, etc.
For the last 25 years he has appeared in various music scenes in Thessaloniki.
For the last 15 years he has been working and curating the music program at Alfredo’s restaurant at Hyatt Regency Casino in Thessaloniki.